Hallway chair races, classroom dance parties, and group sing alongs. Morale boosters like these were the ingredients that helped boost the spirit of some teachers and students across Boulder Valley schools after floods poured through their classrooms in September.

“Some children donated their life savings – their piggy banks – to the Crest View fund,” Merlyn Holmes, a parent of a Crest View Elementary first grader, said. “They were aware that this was a big deal and they were really happy to have a school to go to and to help.”

When heavy rains and disastrous floods hit Boulder County in September 2013, they not only impacted educators all over Boulder Valley School District, but students as well. Teachers and staff were able to keep their cool, though. They not only handled the event well and managed problems as they arose, but they taught valuable lessons to their students along the way. Lessons like: how does a rain cycle work? Why is rain good for our planet and how could it be harmful in a flood? And maybe most importantly: how can we help our community?

END_OF_DOCUMENT_TOKEN_TO_BE_REPLACED

‘sup with all these white kids listening to gangsta rap? I tried to figure it out. Three 20-somethings who grew up in the suburbs of America explain why they love the genre.

Where can you call home? Is it the town your family lives in? The city you grew up in? Or maybe it’s where you choose to raise your own children. Do you choose your home or does it choose you?

Line 77 of the “Boulder Zodiac,” a poem written by Anne Waldman for the Boulder Tattoo Project, reads “you settled here.” This phrase rings true for many participants of the Boulder Tattoo Project, including the project’s manager, Chelsea Pohl. These participants all had a word or a phrase from Waldman’s poem inked onto their bodies as an ode to Boulder.

“The rest of the world is just not as perfect. It’s contradictory: it’s easy to live here, yet it’s challenging. It’s challenging to become an adult here, but it’s a desire,” Pohl said.

Pohl originally hails from Lexington, Ky. She started the Boulder Tattoo Project as an offspring of the original Lexington version. Her husband, Vincent Bachert, welcomed the task of inking over 200 project participants in the couple’s studio, Claw and Talon, with the help of several other Boulder tattoo artists.

Two-hundred Boulderites were brought together through the collaborative efforts of Pohl, Waldman, and many others along the way. These tattoo artists were essential in manifesting the art, poetry, and above all, the feeling of Boulder’s interconnected community, onto project participants’ skin.

In May 2013, Pohl summed up her 13 years of experience in Boulder along with her feelings about the town in her “Love Letter to Boulder.” She also set forward her intentions for the Tattoo Project.

“I think if I’m going to ask people to commit so permanently to their love for this city, I better be clear that I love this city just as deeply as I’m expecting them to,” she wrote.

A Blessing or a Curse?

During the mid-19th century, Chief Niwot was a leader of the Southern Arapaho tribe in the area that is now the Boulder Valley. Upon the arrival of white settlers searching for gold in 1858, Niwot supposedly cursed all future settlers. This is now known as “Niwot’s Curse.”

“People seeing the beauty of this valley will want to stay, and their staying will be the undoing of the beauty,” Arapahoe Chief Niwot supposedly said in 1858 – or so the legend goes.

And how do you get rid of such a curse?

“Go up to a certain part of the Flatirons and eat some dirt,” Pohl said. “That’s the only way to get rid of the curse.”

While some may call Niwot’s words a curse, others only read them as a blessing.

One tattoo recipient regaled fellow ink enthusiasts with Chief Niwot’s tale at Claw and Talon on Saturday, Nov. 2nd during one of the busiest days of the shop’s week-long tattooing marathon. Participants also shared stories about why they chose their specific word or phrase from Anne Waldman’s “Boulder Zodiac.” 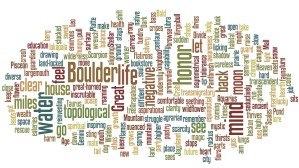 Tom Klenow is no stranger to ink needles; his arms are home to full, colorful tattoo sleeves. Originally from Fargo, North Dakota, Tom said recently moving to Boulder gives his tattoo and the project more significance, “in the sense that I feel more at home here than I ever did in North Dakota.” Up the Boulder was his chosen phrase.

Lisa Roberts got her tattoo on the side of her right foot. It was her first. “I’m getting who. You can make it mean anything,” Roberts said. Although not originally from Boulder, Roberts has lived in in the town for over 25 years and said it’s “home.” Boulder was her number one reason for joining the project.

Kim Goldman received over surface just below her left collarbone. “It’s a unique phrase and a unique spot to get it,” she said. “It will have meaning for me… someday.”

Sean Held and Sierra Held are father and daughter. They were tattooed together on the project’s second day. Sean got the phrase keep scales aligning on his shin while Sierra chose go asymmetrical along her thigh.

“‘Asymmetrical means nothing’s the same: be unique, be yourself; be awesome. It’s hide-able, but also show-able,” Sierra said. Her father had a different reason for his chosen phrase.

“I always work hard at being the best person I can be. I’m balancing back and forth between the things I need to do and the decisions I need to make,” Sean said.

Jessika Fleck’s forearm is now labeled, “your mind stays.” She wrote about the meaning of her tattoo on her blog, harking back to an accident she had two years ago in which she hit her head. At times, Fleck said, she thought she was losing her mind.

“No matter how many loops the roller coaster has or if you happen to hit your head on a window, your mind can’t be lost or stolen,” Fleck wrote.

Forty-five Boulderites were tattooed on Saturday. Despite the constant flow of people waiting for tattoos in Claw and Talon that weekend, the artists maintained their excitement. “Their attitudes are amazing. They’re getting the energy of the people,” Pohl said. “They’re juiced on it.”

Stories like this are what make the whole project worth it to Pohl. During the first weekend of tattooing for the project, word of mouth spread as participants began posting photos, blog entries, poems, and Facebook posts as odes to their tattoos and the Boulder Tattoo Project.

“I cried out of joy, because that’s what makes it worth it – when people share their stories. I’m hoping we’ll get more of that,” Pohl said.

Where do you call home?

To participate, project volunteers had to meet certain criteria, including but not limited to: “Consider Boulder home” and “love Boulder,” the latter being the number one motivator for participants.

“We were told Boulder is a very transient town,” said Kremena Todorova, one of the founding artists of the original Lexington Tattoo Project. Todorova said that although she and Kurt Gohde, her partner in the Lexington Tattoo Project, were primed to feel this way before visiting Boulder, they also spoke to many project participants who are Boulder transplants.

“It gets harder to stay here as you get older, because you have more responsibilities,” said Pohl.

“I have settled here, and it’s like a settling. It’s a work in progress and it’s a challenge to leave my hometown and to drive my stake here and hope it stays. I definitely feel like it’s my home, though.”